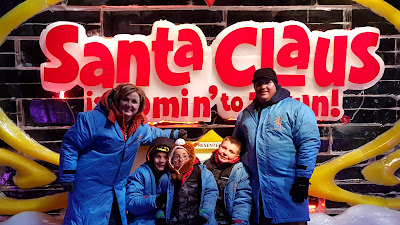 Well we were here in June and we are back again! This time rather than sightseeing, we were on a mission. Luke is a history obsessed 8 year old and memorized the President's all on his own. His dream has been to say them in order in front of the White House! We actually forgot when we were here this summer and he has been begging to come back and do them so here we are! Little man ended up getting all nerved up being filmed but the end result is precious and he was so proud of himself!

Time for my rant...I was SO disappointed in the White House at Christmas. As the national, most well-known landmark in America, one strand of greenery across the balcony was a pathetic attempt at celebrating a National Holiday in this country. It was like a slap in the face and would've honestly looked better completely undecorated. And then there was the National Tree...this was even WORSE! There were no actual decoration on the tree instead throwing some ribbon down the sides with stars representing a Jewish star, completed by a GIANT menorah behind it. I truly left Pennsylvania Ave. with a bitter taste in my mouth and even more disgust than I already had for our President.

Ok...rant over...our other stop in DC was a surprise for the kids. We spent the afternoon at the Gaylord National at "ICE", their winter wonderland ice spectacular! Oh my goodness...this is one of the neatest (and coldest) things we have ever done at Christmas! We have contemplated it a few times in Dallas but Great Wolf Lodge always wins and let me tell you, now that we know how amazing it is, we will be adding it to our to do list back home! A massive winter walk through, set at negative 4 degrees, with everything you can see made solely out of ice! You truly felt like you were walking through the North Pole! At the end was a two story ice castle with ice chutes coming out of it that you can play on as long as you can tolerate the cold! Every year the theme is different and this year's happened to be "Santa Claus is Coming To Town" which really enhanced the North Pole effect! If there is a Gaylord Hotel near you, make a point to go to ICE!!!! It is worth every penny!
Posted by Lukessweetiepie at 4:20 PM