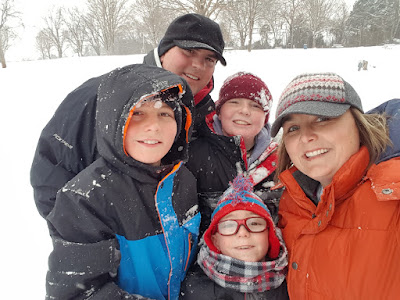 What fun we had in Kentucky! We started off in Bowling Green...home of the Corvette tour. This was such a fascinating factory tour and unfortunately I have no pictures as cameras were banned :( I can tell you this though...if you are ever in the remote area, make a point of going here! It was amazing to watch cars be built from start to finish! The robots driving around and building are fascinating for kids and adults to watch. We took a one hour tour and were not the least bit bored.

Kentucky was also where Craig got to live a personal dream and watch his favorite whiskey be made! But sadly his bubble was burst when his dream became a kid filled nightmare! Yes...we had to take the kids along for this factory tour (quality parenting here!!!). Brian and Matt were actually quite interested. Luke on the other hand was plugging his nose and making gagging sounds the entire time. This fun was brought to an all time high when he promptly barfed in the tank room! Yep...big, chunky vomit falling through the grates, dropping about 100 feet to the bottom. The extra fun of this was Craig and I couldn't just leave the chunks that didn't fit through the grates and we got to pick them up and put them in our coat pockets!!! (I swear I cannot make this stuff up!) We spent the rest of the tour reeking of Luke's stomach, our hands freezing cause our pockets were otherwise occupied and waiting as hard as we could for the tasting room, where we could down samples and forget this nightmare had ever happened! On the plus side...we did get to make our own bottle of whiskey, complete from start to finish which will now serve as a permanent reminder of this special day!!!

From Bowling Green we headed to Louisville...home of lots to keep us busy! We took a tour of Louisville Slugger Factory and watched baseball bats start as trees and finish as useable bats...way too cool! We saw the custom bat orders of so many players and even left with our very own bats! Stop 2 in Louisville was Churchill Downs...home of the derby! This was an unexpected win! I knew it would be cool to see the track, but their interactive museum blew us away! Our final stop was mega Caverns...home of a 3 square mile underground dirtbike course. Uummm...this has my peoples names all over it! I opted out...riding bikes in a cave on dirt with bats....yea...I'm good saying I have never done this!!! I dropped them off for fun and took myself and my kindle to Starbucks and an oil change :) Imagine my surprise when I returned to filthy, mud covered people...complete with Craig's pants  being ripped from his groin to his knees! And the best part is they had the time of their lives!!! I say daily and will say it again...I live with morons!
Here is what I texted my Mom and sisters...
"Well Craigs pants are ripped from his nuts to his knee (literally showing his thigh and undies), he swears he tore his nuts in half, Matt has a bruised and swollen wrist, Luke looks like he bathed in mud, cut his lip and his snot is literally brown from the amount of dirt he "ate" and Brian's shoulders are so sore he can barely lift his arms...and they all said they would go back tomorrow if they could!!!"
#ilivewithmorons

The BEST part of Kentucky was the blizzard that came though. The kids were in complete heaven with the 14 inches of snow we got! We spent so many days playing outside, sledding, snowboarding and making snowmen. For Texas kids....a 14 inch snowstorm is like the mothership arriving and we made the most of it!
Posted by Lukessweetiepie at 11:22 AM