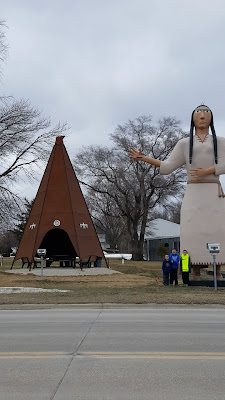 Talk about a slower pace of life and a relaxing stop...Iowa would be this place! Iowa was exactly what you would picture...nothing as far as you can see! I am not kidding, you could see for miles as there is nothing obstructing the view and there was nothing but windmills and farmland. The kids and I learned that 90% of the land in Iowa is farmland...I find that number to be crazy high! I get that it is a farming state, but 90%?!?! That's insane! We anchored ourselves outside of Ames, one of the bigger cities in Iowa and a total college town. We spent a day poking around the city and exploring the college...what a beautiful day we picked! 74 degrees in the middle of Winter in Iowa is unheard of and we got to enjoy just that!

Our only "adventure" in Iowa turned out to be quite the interesting one! I found that there was a kaleidoscope factory in Pocahontas, Iowa...about 90 minutes from where we were. This small town is literally a blink and you missed it kind of place. One main street with about a half dozen shops and businesses. The kids and I ventured off for a day of fun and exploring. Imagine my surprise when Leonard (the builder and 'factory' owner) ended up being a member of Mensa! To say this man was crazy smart is an understatement! He gave the boys and I the most  fascinating Physics, Math and Science lesson for the better part of an hour! He then had the boys make their own kaleidoscopes which made the day even more fun! The BEST part of the day came when Leonard asked the boys if they wanted to do the daily news and weather report for the town. What fun this was! The kids made the report 'live'-on air' and were delighted to get to watch it later on the Internet! After spending almost three hours with Leonard, we hit the local bowling alley for pizza and bowling with the entire place to ourselves! Iowa...for as small and unoccupied as you are you were definitely a success!
Posted by Lukessweetiepie at 4:30 PM