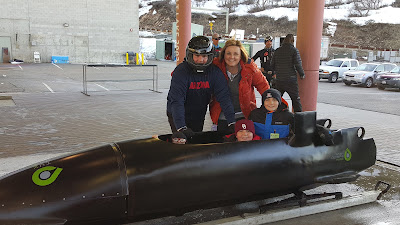 We are back in Utah! On our way back west through the Northern part of America we decided Easter in Park City sounded perfect! My adventure loving family has declared this a state we would definitely consider moving to if we decided to ever leave Texas! On this trip we have been to three different parts (Zion, Moab & now Park City) and have loved one more than the next! We were so lucky to have my BFF of 25 years and her two kids (one of which is my godchild) join us for a super quick, but super fun 24 hours, including Easter morning!

Park City was supposed to be a five day stay and thanks to Mother Nature turned into a nine day stay and there was not a single complaint! The first part of the week included a lot of trips to Olympic Park...we literally couldn't get enough! We visited the Olympic Museum, tried out the virtual rides, watched the history videos, bought all day passes to the Extreme Adventure Park (more on this in a minute), played in the snow and did the funnest thing ever...watched Craig go in an actual Swiss Olympic Bobsled down the actual Olympic track! Talk about a once in a lifetime experience! The only two places in the world you can do this is Park City and Vancouver, and they only offer 6 time slots each day in the winter months. The kids and I got him this for his Birthday and he has been looking forward to it since. Craig has spent a good amount of time on this trip working (to pay for it!) and it was so fun to get to do something just for him! You could not pay me to hop in one of these but Craig got off with a smile lighting up his whole face! Flying down the course at 74mph, taking 16 turns with the g-force shoving him against the side of the sled was "the funnest thing ever" according to Craig! The extreme adventure park was not for the faint of heart! From extreme tubing down the ski jump hills, extreme ziplining at 65mph down a mountain and the adventure ropes course towering in the sky, my crew opened up the place and then shut it down 6 hours later! They even managed to convince me to zipline!

Easter was our final major Holiday of the trip and it was successful! The Bunny came for all 5 kids, leaving baskets and a huge egg hunt for candy and money! Waking up with 5 kiddos made the day so much fun. My guys were so excited to have Lance & Madison here for Easter...the kids all love each other so much and do not get to spend nearly enough time together.

Our trip is now officially in the 2 month homestretch. We know life is going to soon return to normal and the days of endless playing together, sleeping in, staying up late watching movies as a family and just being lazy are coming to an end. Even waking up to the excitement of massive amounts of snow is soon going to be a distant memory. While we are so excited to get back home and see family and friends and our pets, it's hard not to be a little sad at the thought of all of this ending. My kids have become closer than ever and Craig & I have had the chance to just enjoy them without all the stress and chaos that is normal life for us. We have given them the opportunity to truly just be kids, without all the pressures kids now face (completely different than when Craig and I were kids) and will always look back on this as the best thing we ever did! Now...let the countdown begin...Texas here we come! (after a few more stops!)
Posted by Lukessweetiepie at 7:20 PM