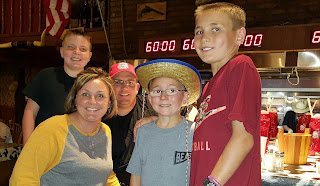 And we are back in Texas! Clearly Texas is home since we can't seem to leave!!! This stop was a place none of us had been...Amarillo! A small Texas town made famous by a few things...a country song, Cadillac Ranch and The Big Texan...the famous steakhouse that is home to the 72oz. steak challenge! Rest assured, we hit these two major landmarks, sang the song and even found an RV Museum that was a hidden gem!  Our RV park was the home of the first photo op...an RV buried in the ground to mimic the famous Cadillacs, complete with the tv still hanging in it! The boys thought this was beyond cool so our next stop was the actual famous landmark...Cadillac Ranch! We pulled up and initially thought "lame". In my head this was gonna be so much cooler than what it actually was. Up close though, I will say its kinda cool. The sheer amount of spraypaint alone on these things is worth an "ooh" and an "ahh". Now let me tell you...3 little boys and a can of spray paint has excitement written all over it. My guys thought being given free reign to just spray paint a car was the coolest thing ever! All in all...a fun stop we can check off our bucket list!

Next stop...the RV Museum. This was an unexpected find that we literally had to tear ourselves away from! It actually started as a private collection and has turned into a free museum that you can go and explore. They had everything from mint condition RV's from the 1930's to the kids favorite...Happy Max from the movie "RV"...our favorite movie well before this trip was created! You were able to go inside all of the RV's and see how they have changed over the years. Talk about a reality wake-up call...we are seriously living in high class quarters compared to early model RV's! The kids and I spent well over an hour exploring this museum and reading all the information we could completely fascinated by it all.

Our final fun activity in Amarillo and one we will never forget was The Big Texan. Craig and my brother have fantasized for 15+ years about eating there one day and taking the 72oz. steak challenge. To date, 55,000 people have taken the challenge and only 9,000 have completed it. How do you not do it when you finally end up there? Especially when you have a fan club of 3 little boys egging you on! I called ahead and signed Craig up for the challenge guaranteeing us front row seats to watch the "show"! The BEST part of this phone call came when the very kind woman named "Mary" offered us free limo service to and from the restaurant...uuummmmmm....YES PLEASE! We opted not to tell the kids about the limo and when a knock on our door came at 6pm, they opened the door to find a limo and driver complete with bull horns on the front and were over the moon excited :) Yes...imagine the visual, an old school limo from the early 90's, painted rusty orange with bull horns arriving in our RV park :) Once we arrived at the restaurant we took a look at what Craig would have to eat in 60 minutes or less...a 72oz steak trimmed perfectly, 3 shrimp, a salad, a roll and a baked potato! We took our seats and the BEST part of the night happened, "our people" were able to live stream this event and watch it right along with us! All of my siblings, their spouses and kids, my parents and our dearest friends got to watch Craig take the challenge! Talk about Friday night fun for the O'Briens!!! Good thing my phone was charged cause the texts were out of control! Craig's meal arrived, the clock started, Craig began eating and the craziest thing happened...all of these complete strangers got up from their tables and started taking Craig's picture! I kid you not, at least 100 people came up to do this. It was the craziest thing I have ever seen...Craig was a one man freak show eating in front of a completely full restaurant of 400+ people. The kids and I were having an absolute ball cheering him on, fielding calls and texts from our live audience and relaying the messages to Craig as well as eating hands down the best filet of our lives! About 50 min in, it happened. Craig looked at me, he looked kind of gray and mouthed "I'm gonna puke" and he did (automatically disqualifying himself unless he chose to eat his barf!) YEP...in a crazy crowded restaurant with all eyes on him, Craig barfed up his entire dinner (thankfully into a bucket), but nonetheless he barfed for an audience. And then crazy thing #2 happened...the entire place broke into cheering and applause! Apparently puking gets a better reaction than actually finishing in Amarillo and the place was on their feet whistling, cheering, clapping...it was insane and hilarious! Sadly the restaurant has the live feed on a delay and stops it when someone pukes so to quote my sister "Craig is officially on Kardashian level...he broke the Internet!". I gotta hand it to Craig, he decided to show his boys, nieces and nephews he is not a quitter and he put down the pail and resumed eating until his clock ran out! All said in done, Craig managed to eat the potato, the shrimp, the salad, the roll and 47oz. of steak in 60 min. I'm proud of him for trying, a little grossed out by what he consumed and seriously had one of the funnest nights ever!
Posted by Lukessweetiepie at 7:46 PM