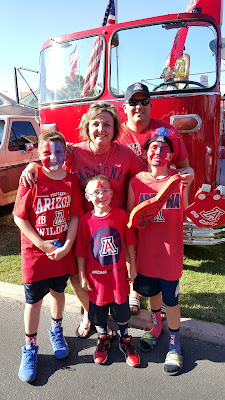 Back to where this Rose Family was originally established...Arizona. We actually didn't have much on our Arizona stop as we were just here with the kids 2 years ago for Spring Break and did everything from top to bottom then! We were fortunate at that time to hit everything from an 18in. blizzard in Flagstaff to 95 degree weather in Tucson so the kids got to see what Arizona really has to offer. This round to Arizona we based ourselves in Casa Grande, a city smack in the middle of Tucson & Phoenix. Our first day in Arizona was perfect...Eegees for lunch and Macayos for dinner (two Arizona chains that we desperately miss!). My oldest friend Andrea (literally have been friends since middle school!) joined us for the day with her kiddos (my godson!!) and we had the best time with all the kids :) We see each other only a few times a year now but manage to pick up right where we leave off every single time! An amazingly fun indoor playground was the hit of the afternoon and all 5 kids spent 3 hours running themselves ragged. The kids loved hearing stories of us as kids all day and Luke finished his night with pre-Birthday singing and the yummiest dessert on the planet...chocolate chimis!!!

Luke's Birthday happened to fall on this leg of our journey...our first celebration for the year in our new home! The boys and I decorated the RV for him as a surprise when he woke up, we had cake, a cinnamon roll "8" and presents galore! He live skyped with Gaga so she could be part of the fun and had the best morning, even declaring he grew on his Birthday cause his knees hurt :) The rest of the day was Luke's choice...we spent the first part at The Ostrich Ranch...an oldie but goodie located right off the freeway between Phoenix & Tucson. It's a petting on zoo on steroids complete with goats in the sky! Little man had a ball running from animal to animal with giant cups of food and even scored a free ostrich feather from the gift shop as a Birthday treat :) Next stop...Dave & Busters...Luke's favorite restaurant! The boys got extra lucky here as DHL was having a convention. A few guys on their way out gave the boys each an unlimited video games card, good for the rest of the day! What a LUCKY surprise!!! They saved their cards we had bought for the games where you win tickets and spent hours playing all the video games they could. Craig & I literally had to drag them out of there!!! Back home to our RV for cake and a late night swim concluded Luke's big day :)

Our main reason for stopping in Arizona was my surprise to Craig & Brian...tickets to University of Arizona vs, UCLA football game at Wildcats home! Brian was over the  moon...his dream has been to see a home game (he has been to away ones with Craig) and seats on the 50 yard line are about as good as it can get!!! We headed down to Tucson early so we could stop and shop for new UA apparel, as well as partake in all the fun going on around campus as not only was this a home game, but it was chosen as the ESPN College Gameday Game of the Week! Seriously...Brian's world just kept getting better and better!!! Matt was even a good sport and dressed up complete with facepaint even though he announced multiple times he is an OU fan, not a UA fan! Craig managed to catch up with one of his childhood friends before the game for a few minutes while the kids had fun in the Coca Cola Kidzone. We got into the stadium and I don't think Brian stopped smiling the whole 4 hours...even though Arizona got their butts handed to them on a platter with a massively embarrassing loss! He was a true fan that stayed till the end, even though the majority of the stadium had cleared out and declared this the best day of his life!  Next stop...California!
Posted by Lukessweetiepie at 12:36 PM