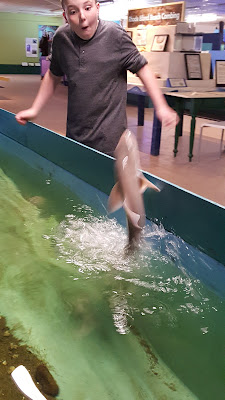 Connecticut & Rhode Island are being lumped into one post as Rhode island is pretty tiny ;) Pretty cool little state, but nonetheless, pretty tiny! We really enjoyed our time in Connecticut, everything about this state is pretty. The homes, the landscape, the downtown's, and the beach was home to the neatest shells we have ever seen! The kids and I got to spend time in Groton, CT...which is the submarine capital of the world! It is home to the USS Nautilus, the first submarine to make it to the North Pole, as well as the Naval Submarine Base and the Submarine Force Library & Museum. We had such a good time learning all about submarines and seeing all the artifacts, along with going inside of the USS Nautilus!! Talking with the elderly volunteers who had actually been on these submarines was quite possibly the best history lesson we have gotten so far.

The next stop was a highly anticipated one in this candy loving family....The Pez Factory in Orange, CT! Such a fun place...if you are ever remotely in the area I highly recommend this place! It's the working PEZ Factory, along with a museum with every PEZ dispenser ever made, interactive PEZ games, and the coolest gift shop. We spent far more time here than we originally planned and left complete with sacks and buckets (literally) filled with one of our favorite treats!

From PEZ we ventured down to New Haven, CT where we found the seashell mothership! We wanted to feel the water in the Atlantic so we ventured to the beaches...this is where we found a sight that I in 36 years have never seen. Seashells as far as you could see, stacked as high as 3ft! You were just crushing them as you walked and the shells themselves were bigger than my hand! This is a little kids paradise...I so wish my 3 nieces that just spent time in San Diego beaches with us were here...those little girls were so excited about the dime sized shells like they were real treasure! I can only imagine their reactions if they had seen what we stumbled on!!! I tried to capture this wonder in pictures but it really didn't do it justice :)

The yummiest surprise of the day (even better than PEZ!) was the delicious, mouthwatering seafood shack on the beach that was open and home of some of the best seafood we have to date! Matt had fried swordfish and loved it, Brian stuck with his favorite and plowed through a lobster roll faster than you could blink! I had yummy crab cakes and lobster bisque which was delish! Luke was the family dud ordering a grilled cheese and french fries! Poor Craig missed out so we packed a to go bag to surprise him ;)

We also took the opportunity to venture into Rhode Island. Part of the reason we couldn't make Rhode Island a complete stop was due to seasonal closings. We are finding that being on the east coast in November is more difficult than we thought in terms of finding year round RV Parks, therefore causing us to pick a central location and travel in the Jeep from place to place. Fortunately these states are all pretty small and we can completely cross them in less time than it takes us to get to my parents house back home!

Rhode Island is every bit as beautiful as Connecticut, but I will say the people are less friendly as a whole. Now take this for what it's worth...I am a southern girl who has a huge focus on good manners so I might not be a fair judge of this ;) We found such a fun aquarium in Rhode Island...it was a hands on marine biology center that lets the kids touch almost everything there! It is full of 'animals' found in the waters in this neck of America and was awesome! The BEST picture of the trip so far was taken here...Matt was standing watching these sharks and one jumped up a good few feet right in his face! The true look of surprise on his his face was priceless and I am so glad I captured it! We also went and saw Cliff Walk, along with another yummy meal down by the water....Rhode Island...success!

Posted by Lukessweetiepie at 11:44 AM