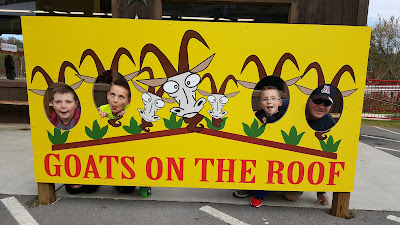 Holy Smokies...this family is in LOVE with Tennessee!!! If we ever leave Texas, there is where you are going to find us! We spent almost a full week covering the state... going from Memphis to Nashville to Pigeon Forge/Gatlinburg and were still sad we had to leave. Bear with the long post and tons of pictures...we seriously loved this place!!!

Memphis was stop #1 and we literally stayed on the Mississippi River! Tom Sawyer's RV Park has got to be the coolest place and yet there is nothing "organized" to do! Our RV was parked less than 10 yards from the river and all 5 of us were completely mesmerized watching the barges go by! It quickly became a full fledged activity with someone yelling "one is coming" and all of us looking out the windows or sitting on the bench outside. The sheer capacity of these massive floating islands chugging by was such a neat thing to see firsthand. The kids and I ventured into Memphis for a day of fun and education. First stop...the Peabody Hotel, home of the world famous duck march down the red carpet 2x/daily. No joke y'all...this is one of the funnest free things we have stumbled on so far. This man, called the Peabody Duckmaster, makes a hefty living marching ducks up and down their private elevator from their $200,000 penthouse on the roof to the lobby via a red carpet where they climb a few stairs and splash into the fountain! These ducks have been on Jimmy Kimmel, Sesame Street and more...and the daily march has been happening everyday for over 90 years!!! If you have never seen this...put it on your checklist! Our next stop was Huey's, your typical bar food type restaurant but will keep your kids entertained for hours! They hand you a bucket of crayons and toothpicks, plus straws when you sit down. The purpose...color on the walls and shoot the toothpicks through the straws trying to make them stick on the ceiling! UUUMMMM...can we say fun?!?! This place was right up my guys alley and I was litterally dragging them out of there! Next stop...The National Civil Rights Museum, located at The Lorraine Motel where Martin Luther King Jr. was shot and killed. Brian spent the better part of 5th grade learning about this topic and the events leading up to it and was fascinated by the museum. And BAAMMM...as the teacher, I feel like I can check a good amount of Social Studies off the list for Matt as he is 5th grade now :) It is the neatest thing to get to go so many places with my boys that they have learned about and see the excitement on their faces when they look at an exhibit, turn around and tell me they already know all about it and excitedly start telling me all the details! We have decided we are much more visual learners and are loving actually seeing things we learn about come to life!

The drive from Memphis to Nashville contained a pitstop requested from Brian...this Summer when my Grandfather passed away, Brian and my Dad drove together from Texas to Ohio for the funeral. They stopped outside of Nashville for the night and had dinner at Maria's Mexican Restaurant, a restaurant that according to them "had the very best Mexican food they have had since we moved from Arizona".  They liked it so much that they actually stopped again on the return trip a few days later. Brian has been talking about this place since August and demanded it be on our journey so to Maria's we went. (Besides...is this family that is stuck in TexMex land Texas ever going to pass up an opportunity for authentic Mexican food?!?!?) Maria's was everything they promised...huge portions of true Mexican food and "no gravy, chili, or queso"!!! The best part of this was when the manager recognized Brian as 'the boy who came here with his Grandfather twice in a few days this summer'...clearly they made themselves known...ha!

Nashville was stop #2 in Tennessee. Seeing as how country music is the only music considered music in our house, this was an exciting stop! Brian and I took a backstage tour of the Grand Ole Opry which was a dream come true. I would have killed to score tickets for the Christmas Show going on or the CMA's, both happening while we were there...grrrrrrrrrrr, but you can't have everything! We had the best lunch with an honorary family member, Justin. This kid (I say kid, yet he is now taller than me!) has been a part of my life for over 20 years. I was there when he came home from the hospital, babysat him till he no longer needed one and he was my ring bearer in our wedding. Now he is in college and just about a fully grown man. He and I couldn't get over how weird it was to be at lunch together, at his college, with my kids! The kids and I saw "Cooter's" (and they got a quick lesson on what it is!), and even took a behind the scenes tour with a marine biologist through The Aquarium. Matt was all over this one with the ocean being his passion in life! My second highlight was getting to go to the real "Bluebird Cafe"...a Nashville legend made more famous by my favorite tv show...Nashville!

Our final Tennessee stop was Pigeon Forge and Gatlinburg (located 8 miles apart, separated by the Smoky Mountain National Park). Holy cow...talk about a true kids dream come true! This town is like any really fun beach town in America x1000!!! (And there's not even a beach!) There must be 5 stationary carnivals, at least 25 go kart and mini golf places, all themed differently, home to Dollywood, every restaurant ever imagined (both chain and themed), multiple show halls, at least 100 souvenir stores, Ripley's of every kind, indoor magic quests of every kind, and I kid you not...self controlled roller coasters coming straight down the sides of mountains which my kids LOVED!!!!! And this was only Pigeon Forge! Gatlinburg was its own kind of fun with even more craziness! It had all the same things of Pigeon Forge, plus a huge mountain with not only a ski resort at the top but a "theme park"! You could literally spend a week in this part of Tennessee and not do half of what is offered! Now the best part of these two towns is your are in true hillbilly country, a saying to which they proudly declare and own! It is written right on the buildings and signs. We are talking about true Americans drinking homemade moonshine on their porches and as friendly as you'll ever meet! Our skyride operator proudly declared he "was living the dream"...he was 44, had 9 kids and 6 grandkids, his oldest child being 31...you do the math. Friendliest, nicest guy who I'm sure saw the calculating look on my face as I quickly did and redid the math to make sure I was correct :) We rode a mountain coaster at a place called "Goats on the roof" where you guessed it, there were actual goats on the roof! The fact that their laws dictate if you are simply 50 inches tall, you can be strapped into a car by yourself and fly down a mountain at 30mph in a car you control for over a mile is crazy (but really fun!!!) We also rode the Alpine Slide in Gatlinburg, which was essentially self controlled bobsleds down the mountain and insanely fun. The Fall colors in Tennessee were a sight that took your breath away! Driving through them in Smoky Mountains National Park and then going over the top of them on sky rides and ski lifts was something I could do over and over again. The last activity we did in this neck of the woods was The Lost Sea Adventure. This gem was something on my list since my friend Shana did it with her kids last summer. Now mind you, I was perfectly happy with my people doing this without me. I am truly terrified of bats and was panicking the whole time I was in the cave. I even called ahead and was "assured" by a 16 year old that he hasn't seen bats...not sure whether to believe him or not! Matt was so excited to climb down natural caverns and find the largest known underground lake! Taking a boat ride through it topped off that fun. I of course was THAT person...the one who wore flip flops (is there really any other shoe???) and a baseball hat to cover my head from bats, pulled down crazy low so I could barely see (I had nothing I wanted to see!). Go figure I managed to slip on loose gravel, falling flat on my face and ripping my knee, shin and toes apart and then got to spend the rest of the tour with blood running down my leg and everyone staring at me :) But...my ankle held up so at least my reconstruction surgery last year worked!

Sorry for the length of this one but seriously...if they need poster people for tourism to Tennessee...call the Rose Family! We have NOTHING bad to say about the whole dang state!!!! If any of you are looking for a random, insanely fun family vacation...RUN to Gatlinburg and Pigeon Forge!
Posted by Lukessweetiepie at 9:10 PM