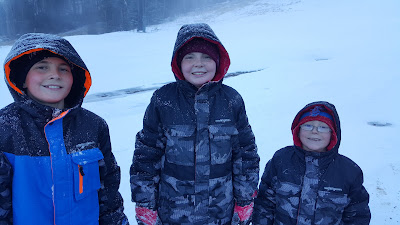 I have always wanted to visit the upper Northeast and now I see why...it is absolutely gorgeous!!! There wasn't one bad thing I can say about New Hampshire...the people were so friendly, the gas was cheap, the scenery is breathtaking, the roads are great, the houses are beautiful and my kids LOVED it here! This is definitely a corner of the country we will be back too!

We didn't do much in New Hampshire...unless you count visiting the Guinness World Record Holding Candy Store for the longest candy counter in the world!!! Uummmm...this was a place I could barely drag the kids out of...I have never seen so many choices for candy in my life!

We woke up to snow which sent the kids over the moon...they have been in some seriously cold weather (in the teens as a high!) in the last few weeks, but no snow The excitement coming from this RV probably woke the whole RV park!!! They were outside faster than I could declare "snow day" dressed in their gear ready to play. Unfortunately as it was the first snow of the season, there wasn't much to play in so we went in search of more snow...and WE FOUND IT! The local ski resort less than 5 miles away had mountains of it, all fresh and waiting to be played in. They were even making snow and let the kids play under the blowers! Two hours later, with frozen toes and red cheeks, my guys called new Hampshire a SUCCESS!!!!

Unfortunately thanks to the snow we had to skip our day trip to Vermont to see the Ben & Jerry Factory and watch maple syrup being made...such a bummer as we were really looking forward to both of these activities. But in the spirit of being safe...an important one in an RV...we decided to make our way to Maine for Thanksgiving early :) Now we definitely have to return...we need to complete our missing state!!!
Posted by Lukessweetiepie at 3:17 PM