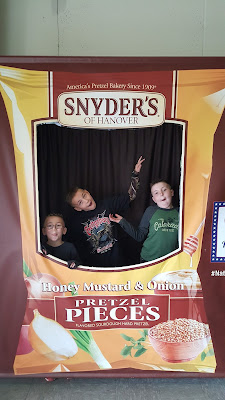 Well...the kids and I ate our way through Pennsylvania! We ended up making a few detours in this state thanks to Craig's work schedule but it ended up working out :) Our first stop was Gettysburg, a city full of history. We definitely got our social studies done here...holy cow what a NEAT place! I have always thought this city would be a giant yawnfest...as blood, guns and battles are not my thing. I can say I was completely wrong! I found it as fascinating as the boys (maybe not for the same reasons!) There are so many museums, places to see, exhibits and interactive things to do here. Did I mention they have the BEST main street full of shops?!?!?! The kids were mesmerized by Gettysburg National Park, so much so that I was literally dragging them out! Lincoln's Train Museum may appear to be insignificant but was my favorite place in the whole city! President Lincoln talking to us and taking us on his train that chugged along the countryside was the coolest thing! Sadly we were here in the wrong season as most of the live reenactment was over for the season but we still managed to have a blast! The kids have already listed this city on our list of places to come back to!

Next stop...Hanover, Pennsylvania...home of some crazy awesome food factories complete with tours!!! This city may be small and not full of tourist attractions but we sure LOVED it! We took tours of both Snyder and UTZ. Both have factory stores that you can shop in, as well as endless samples given during the tours. Talk about FUN! We watched pretzels and potato chips be made from beginning to end...literally saw the potatoes being dumped off the trucks and watched those same potatoes being put in their bags as chips! By time we were done in Hanover we had a trunk full of salty snacks and full bellies!!!

Quick pitstop was next and was a total SURPRISE! My dear friend Sara (from home in Texas) grew up Amish. What a surprise to find out she was less than 40 minutes away visiting her mom! Lancaster here we come...the kids and I had so much fun seeing someone from home while we are so far away, along with meeting her mom & sister and eating at a delicious Amish cafe that came highly recommended. This was such a neat real life experience for the boys to not only see the Amish, but to meet currently practicing ones, along with shopping in their stores with them! And for me to see Sara and spend time with her, plus seeing her in a totally different element was a priceless stop on this adventure ;)

Our final Pennsylvania stop was Philadelphia...better known as Filthadelphia to Luke :) This stop came as a huge surprise to my country lifestyle, living in a bubble, private school kids...they absolutely HATED this stop! They complained the entire time, could not stop commenting on how miserable it would be to live in a big city, were disgusted by the fact that there are not backyards or cul-de-sacs to play in and don't even get me started on their commentary on people walking everywhere with no place for cars! I was truly not prepared for this. My kids are clearly sheltered but I thought had traveled enough in their short lives to be open to other lifestyles. Clearly I thought wrong! They all went as far as to declare they will never marry a girl from a big city for fear they would have to move to one at some point! Good news for me on this stop was I am pretty confident my boys will always stick to the South and be somewhere near their Momma ;) We did manage to squeeze in the Liberty Bell and Independence Halls, plus tried authentic cheesesteaks! (WIN for me...they like mine better!!!!)
Posted by Lukessweetiepie at 8:00 PM